Looking for a household removal?  Visit our sister company

Gallery
The Challenges
Testimonial
Commercial Moving Since 1984
Award Winning Business
9.9/10 from 90+ Reviews
Offices throughout the UK

Alder Hey Children’s NHS Trust needed a company to assist with their relocation to the new Alder Hey in The Park. After a rigorous tendering process, BCL were awarded the contract.

Appointments available by video or in person.

Get your free guide to a successful office relocation

Photos from the move of Alder Hey Children's NHS Trust

Project management and planning was the key to success

The planning process was crucial to the success of the project; the move program was over a short period of time to minimise or eliminate any disruption to the hospital. BCL Office Moving wanted to ensure that every stakeholder at the hospital was fully aware of all the details and that their needs were completely met.

The Regional Manager and Project Manager met with staff from every department over a three week period to ascertain their requirements and the scope of the project as a whole. Once all the information had been gathered, the team produced a detailed schedule and resource plan. This included specific dates, times any special requirements for every department. Further planning meetings were held with the Alder Hey project team where this was agreed, BCL Office Moving then commenced putting the plan into action.

There were 7155 crates to be distributed across the hospital; this took place two weeks before the move. The project manager hand delivered all of the crate labels to every department. He took this as an opportunity to further discuss the fine details of the fast approaching relocation with the staff, detailing their role within the move and answering any questions or queries they had.

No disruption to A&E - no downtime for this essential service

On the 28th of September 2015, the relocation began. After individual team briefings and induction to site, the move teams commenced the task of relocating 80,000 cubic feet of furniture, hospital equipment, crates and IT to the newly constructed site. BCL Office Moving were on site for nine days, at some stages overnight. Specifically, when the Accident and Emergency department was moved there was zero downtime. This was achieved by A&E running concurrently at both sites, only when the new A&E department was fully operational was the old one closed.

The BCL Office Moving team worked to floor plans for all 77 departments. Each piece of furniture and equipment, all 120 pieces of IT and each and every of the 7155 crates were placed in the right part of the right room within the groundbreaking new facility – Alder Hey in The Park.

On completion of the main project, a BCL team remained on site for two weeks to assist with collection of crates and help in any way they could to ensure the staff had everything they needed. The move manager and regional manager then had a final meeting with the Alder Hey project team – the project had been completed to the full satisfaction of Alder Hey, and BCL Office Moving was both delighted and proud of the feedback we received from them. 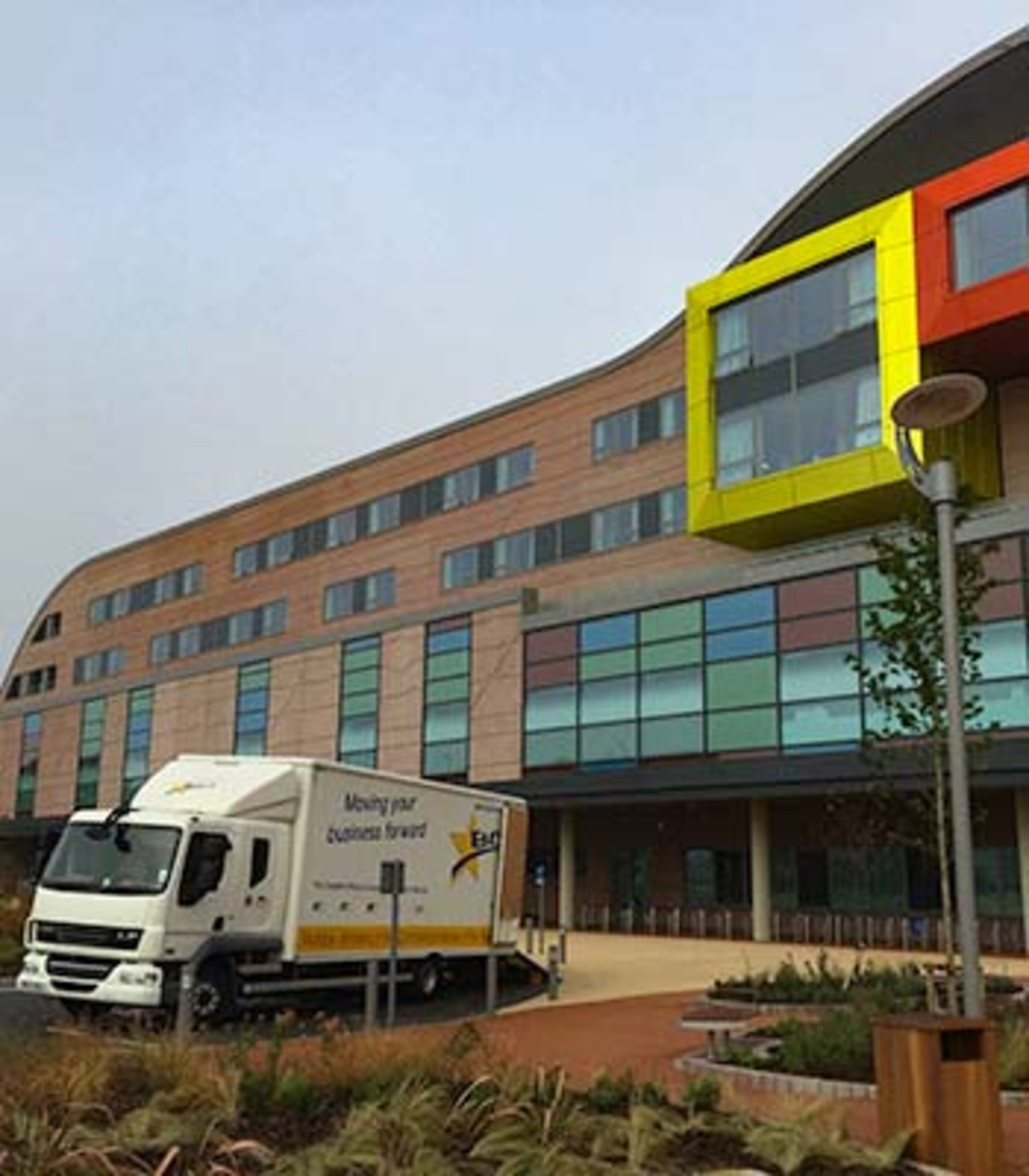 "We never would have got to where we are without both your knowledge and expertise. From start to finish the job was done to a high standard and couldn’t fault anyone or anything throughout the whole process.

Working with the Move Manager has been an absolute pleasure and couldn’t speak highly enough of him. From visiting all of the areas on the old site, to project managing the team throughout the whole move was effortless for him. Also, when it came to explaining the process to individuals within each of the departments, it was never a problem, covering every detail until they felt confident with what was happening.

And finally thanks to all your team that actually made the move happen. All were very professional throughout and couldn’t do enough for you. With delivering over 7000 crates and furniture in the space of 9 days, shows how hard they worked to get the job done".

We can help your team to plan and navigate your relocation

Let us manage and store your paper records

Completely or partially clear out your office or commercial premises

How may we help?

We take pride in helping our customers have successful office moves, with as much - or as little - assistance in the planning and preparation as you'd like. Take advantage of our expertise and have the best office relocation possible.

Contact us today or call 0845 077 2825 for a free, no obligation discussion of your commercial moving needs.

Let us ring you back

Fill out your details and we'll give you a call you back to arrange a free, no obligation discussion of your commercial moving needs.

Is our office closed right now? Maybe you can't speak on the phone? We can carry out your survey by video or in person.

See what our customers think of us...

The overall service provided by your company has been excellent value

I wouldn’t normally get involved directly in providing feedback on performance of our contractors, but feel I must commend the excellent service that we have received from your team in moving us to our new office on Hagley Road and the clearance of Calthorpe Road.

The team were both efficient in their work and extremely well-mannered. Three days ago I couldn’t have imagined sitting here now in a functioning office with our old office completely clear of the clutter that had built up over 20 years. Please extend my thanks to them.

I feel that the overall service provided by your company has been excellent value and I would not hesitate to recommend you in the future.

Very impressed by their professionalism

They took extra care to protect our Buddha statues. We were very impressed by their professionalism.

Why did you use us? Seemed professional and experienced

Very impressed by the excellent service. It made our move much easier.

Pleased with the speed and professionalism

Why did you use us? Just googled removal agencies and BCL seemed the nearest and most professional option.

Comments regarding your initial enquiry - Really pleased with the speed and professionalism my order was dealt with.

Accommodating to our requests and efficient

Very friendly, accommodating to our requests and efficient.

Why did you use us? Most competitive quote and most prompt at replying

I was called back within a couple of hours of my first enquiry and the person handling the call (Jacki) was very friendly, helpful and knowledgable.

Please pass on my thanks to the team as our move went very smoothly and the team were very friendly and efficient!

Find out what more of our customers said about us

Complete the form below to get your UK Office Removal quotation

Complete the form below to get your European Office Removal quotation

Complete the form below to get your International Office Removal quotation

Complete the form below to get your Self Storage quotation

Close Estimate Section
Call Me Back